Losers Can Be Winners!

Last weekend we had my good friend Jacqui Dinneen from Auckland down staying with us. What a great weekend! She left her husband - Shane - and her two girls - Ashley and Alexis - at home and came away BY HERSELF. I think the best bit for her was sleeping in AND not having to worry about anyone but herself. Things that us single folk take for granted.
On the Friday night we met up with some other Auckland friends - Sean, Karen and Max McArthy - who were down for a couple of days visiting old haunts. Sean went to Art College down here 25 years ago and Karen worked for a small newspaper in Sefton. Max is only 6 so it was his first visit to the Garden City.
We had a lovely dinner at the Belgium Beer Cafe and it was so great to catch up with them again. 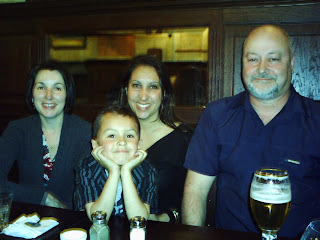 On Saturday Jacqui and I went to the Craft Fair at Addington. There was lots to look at. I couldn't help but notice the many stalls for soaps and chocolates. I guess they are catering mainly to the female population and these are two things we like - smelling nice and anything chocolate.
I bought some beads and beading wire but most novelty stuff was a little overpriced for my liking. I did see a great idea for a bird feeder - a pottery/china cup and saucer sitting on top of a post. Easy yet effective. But they were selling for some ridiculous price so I thought I might give it a go myself. Watch this space.
After a nice lunch at Denny's. (Yes, we are both cheap dates!) We went for a walk through Hagley Park to the Arts Centre for an ice cream. (Please note this was my last weekend BEFORE starting Weight Watchers so I had to make it count!).
The trees through Hagley Park are all in blossom at the moment and look beautiful. Jacqui is a florist so was most appreciative of all the spring flowers in bloom. 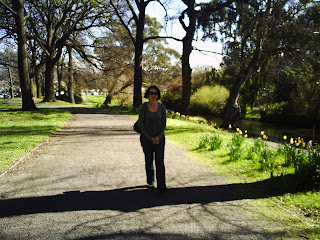 Next we decided to head home for an afternoon nap which Jacqui was most excited about - having a 3 year old and a 1 year old doesn't leave much time for afternoon naps. Another thing I am just not ready to give up.
Saturday night we got pizzas and a movie and stayed in. It was a nice relaxing night in.
After a nice lunch at The Globe on Sunday we had a cuppa in the sun before heading to the airport. The weekend was over all too quickly.
Last Tuesday was my first Weight Watchers meeting. Eek! I weighed in heavier than I actually thought I was which was a little bit of a shock. But made me all the more determined. So the last week has been all about counting points and refamiliarising myself with the WW points system. It's easy once you get the hang of it. The first couple of days I ate and then counted the points I'd eaten... often going over my points allowance. By the third day I realised that planning the menu for the day ahead was a much better idea. On Friday I had a binge on a handful of salt & vinegar chips and about 10 WW chocolate chip cookies.... it tasted so good.... until I counted the points. It worked out to be about 12 points. I'm only allowed 21 per day!
So on Saturday I went for 3 walks - totalling 2.5 hours which only just cancelled out the binge.. Makes me look at chips in a whole new light.
Tonight was the weigh in. Dum-dum-dummmm!! I lost (yes, that's right LOST) a whopping 2.2 kilos!! I was floored! I was hoping to lose at least 500 grams. I know it's not always going to be that high but what a great start! I had to talk about my first week at the meeting tonight in front of everyone and it was like giving an Oscar speech - afterwards everyone clapped and I nearly cried!
Claire and Mark went up North for 6 days on Friday and are due back tomorrow. Sounds like they have been visiting up a storm!! I'm looking forward to hearing all about it tomorrow night.
I managed to score myself a part time job 4 nights a week for a company called CherryTree. I start on Monday and am really excited about it. I will be telemarketing which I've never done before but it's not the usual hard sell kind of telemarketing. It's offering to send out information on a tour of the company which, if you join, offers it's members wholesale prices on a whole lot of goods saving lots of dosh. I'm interested to give it a go.

And that's the happenings of the past few weeks. I got the potatoes planted in the weekend. The garden looks like it has two dead bodies buried in it! The weather has been fantastic lately with a bit of welcome rain this afternoon/evening. It is supposed to be thunder and lightening tonight. Oooh how exciting!!
I'm off to put the jug on for a cup of tea and two Weight Watchers biscuits which are awfully small but really yummy and only equal 1 point!
Posted by The Editor at 7:40 PM 2 comments:

First up I must congratulate ALL entries in the caption competition last month - and the winner is.............drumroll please............... EVERYONE! They were all great entries. Well done. Now the pressure is on to find another good photo for the next competition. Watch this space.
Claire is up to her usual tricks of passing assignments left, right, and centre. The last assignment to come back had a pass with MERIT. No simple old passes for Claire, oh no no no! She's a machine!!
And speaking of passes, I also know that Mum is doing extremely well and got an A in her last assignment which is brilliant!! Well done Mum. Sending you a great big congratulatory virtual hug!!
Claire turned 30th on 3rd September - of course no one believes she's THAT old.... which is good because that hopefully means that no one believes that I am 5 years older that THAT.
Mark whisked Claire off for a romantic mini-break to the Capital for two nights which sounds like it was lovely. They said they had a great time with just the right balance of relaxation and tourist attractions, as well as a lot of people watching (commonly known as 'staring') which is ALWAYS fun (as long as you're stationary and don't walk into a sign). 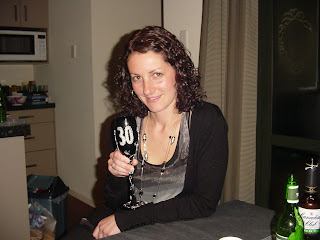 We had a few people around for a takeaway meal on Saturday night and then invited others to come along later for drinks. It was a good turn out and everyone seemed to have a good time. It was good to catch up with some we hadn't seen for a wee while.

We also had Alex's 19th birthday on 6 September. 19!!!! Wow - time has flown by.
Claire and I were invited to join the Pak's, Henry, Sam, and Mitchell for dinner at Garden Restaurant on Sunday night. It's a buffet and is mighty yummy. I left there feeling like I was actually going explode. Paula also snuck in a yummy chocolate birthday cake which I HAD to have a slice of. 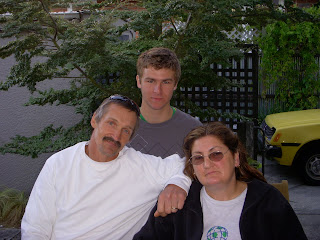 We had our end of season function for work at the end of August. We don't have anything much at Christmas as it is our busiest time so they put on a dinner and band for all staff and partners mid year. It's always a good night. I got a little (lot) tipsy and ended up losing my camera. It is a shame as there would have been some brilliant photos with some hunky guys on it. I initially thought that someone may have picked it up and would return it to me at work so I put a notice up on the noticeboard at work but after two weeks I can safely assume that I won't be seeing the camera again. Someone obviously needed it more than me. The hardest thing about that is that it is either someone I work with or a partner that has taken it. Doesn't make me feel very good about the morals of my workmates. If I had a dollar for everytime someone asked me if I had found my camera I could afford a new one! Nice that they all care though. Oh well, that's life I guess.

My new favourite thing is SKYPING. Ooh it's so great - seeing AND talking. So great for those far away AND for growing babies!
Exciting news - I will be joining Weight Watchers on Tuesday which I am looking forward to. I have slowly but steadily put on 21 kilos in the 6 years that I have been home from my OE. That's a lot. I looked up on the WW website today and apparently my weight is perfect............ if I was 200cm tall!!! Easier to lose weight than lengthen my body I think. So Tuesday is D Day. I thought I would bring it up so that I am more likely to be motivated knowing that you all know. That's the theory anyway.
Oh and something completely unrelated but worth a mention - one of our sales guys from work, Robert, is the proud father of the new Miss South Island. His daughter, Kelly, was approached while working at Dragonfly in Rolleston and asked to be part of the pageant. She agreed and won it!! She is now getting ready for Miss NZ at the end of October. Very exciting. I think Robert is getting ready to quit work and be her manager if she wins that one! 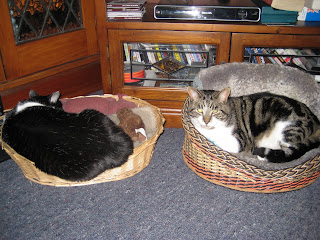