Lines In The Sand

It's been nearly 6 weeks since the Canterbury earthquake and we are STILL experiencing aftershocks. Some are under the radar and aren't even noticeable. Others are bigger and remind us just who is still in charge. There have been more than 1500 aftershocks now.


I had taken a break from my daily routine and blamed everything on the earthquake - not exercising, not going out, not living life. So I decided last week it was high time to draw a line in the sand and move on.

This week has been BUSY! I went to speed dating last Monday which was actually a lot more fun and a lot less embarassing than I thought it would be.

I went with a friend of my flatmate which was nice to have some support. There were 12 guys and 11 girls there (one girl had pulled out at the last minute so on every round 1 guy had to sit it out). The rounds lasted for 4 minutes and 19 seconds before the bell rang to move on.

All the guys were nice enough. The co-ordinator, Jane, gave a spiel at the beginning explaining what to do and told us to tick the people we think we would like to go out for coffee with - not to sit there imagining what our wedding days would be like or how our kids would look. It was more like a networking evening to meet new people and hopefully make some new friends.
Of the 12 guys, I ticked 5. 4 of the 5 ticked me which gave me access to their phone number. Jane sent this information in an email the following day and also said that out of the 12 guys, 10 of them were keen to meet me again. Whoopah!! A bit of a boost for my ego!

So, this week has been a dating frenzy. Lucky I have the night off dating tonight for netball otherwise I don't know when I find the time to update the blog!
Monday night was actually a date with a guy I met at the Yaldhurst Tavern when I was there for a night out a few weeks ago with Claire and Scott. It was nice and he seems like a nice guy.
On Tuesday night I met up with Scott who is Taiwanese and has lived in NZ for 14 years studying and now working as a physio therapist. He was nice and when he told me his favourite movie is The Notebook, I knew I had a friend for life.
Wednesday night's date was Neill (yes, with 2 L's) who is a counsellor. He is nice and very easy to chat to. We are meeting up again next week also.
Possibly meeting up with Marten, the horse dentist (laugh out loud if you like, I did) for a coffee after work tomorrow but that has yet to be confirmed.
So as you can see I have been VERY busy and important.

Last Tuesday our cousin Patrice, her husband Vawn, and their kids Dylan and Krystle were in Christchurch for one night only and invited me out for dinner. I enjoy meeting up with them when they are up from Balclutha. We went out for dinner and I played Hang Man with the kids.... and lost..... again. I told them I was going to think up some really good words and win next time. Vawn said I say that every time. Unfortunately Claire couldn't make it this time as she already had plans. It was a really nice evening catching up. They were in Christchurch to pick up a year old Bassett Hound puppy and take back home as a new pet.

On Saturday I flew to Queenstown for the night. The flight was very turbulant and I wasn't sure if we were actually going to land. The plane was lowering to the runway and then we started climbing again. It seemed like ages before we again started our descent and finally landed in Qtown. It was nice to be there and to see the Southern Barts and their new house.

Annabelle is just delicious! She seems to have her own little language with some Japanese and Italian thrown in for good measure - Catkin is 'Mama-san', peas are 'Peas-a', and cheese is 'Cheese-a'. I am amazed at her perserverance and patience which possibly she gets from Gavin. And her ability to entertain herself. She is just so precious. And funny (which she obviously gets from me). 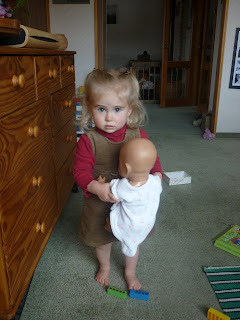 It was a lovely mini-break and I was looked after and fed very well. Catkin is now 5 months pregnant and looks the picture of health. I can't wait until February to have another little one to cluck over. 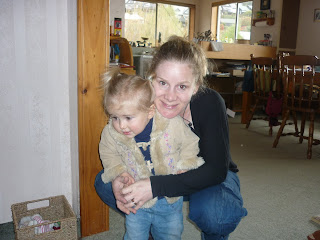 Tonight is our final netball game at Howzat in Wise Street, Addington. They are moving all the teams over to Matipo Street in Riccarton due to an increase in rent and a decline in teams. We are playing the Zero's tonight and the blonde tart from a few weeks ago will no doubt be playing. Hopefully she won't be so gobby and I won't have to tell her off again.
If we win tonight we get into the semi finals on Sunday. Half our team won't be available to play on Sunday so it won't be the end of the world if we don't win.

This just in: We won our game tonight which means we play in the finals on Sunday. Yipee! Blonde tart did not show.