I decided to take a break from Weight Watchers for the week of my birthday because there were so many treats that were just too tempting to say no to. Unfortunately I forgot to tell the scales about my plan and they retaliated by adding more numbers to my already not so small number. Hmmmm.. next week I will be back on track. Promise.
(I can visualise Mum's knitted brow as she reads this. 'Don't think of it as a diet, think of it as a lifestyle change' I can hear her saying. I know - I just wanted a chocolate cake induced lifestyle for the week.)
The past week has been a blur of wine, food and cakes. It all started last Saturday when Claire and I were invited to my bestie from work's 50th birthday celebration. Claire had volunteered to be the sober driver (thanks Claire - although my head did not thank you on Sunday morning! Totally your fault, not mine! Ha)
It was a great night with loads of laughter. Claire may have even met a new suitor - but I'll let her tell you all about that at her leisure... except his name is Scott, he's 33ish, he's my work besties nephew and he's a farrier. What? I'm just saying! He seems very nice.
So I turned another year older last Wednesday. I was very spoilt and spent most of my day at work fielding phone calls, and replying to text messages and emails. I'm definately considering employing an assistant for next years birthday. Two of my work mates brought in cakes to share for morning tea and they were YUMMY!
Claire cooked dinner for us on Wednesday night and Paula and Kazio came over to join us. Lance unexpectedly turned up too which was a very nice surprise.
Kazio brought over a bottle of his fathers homemade passionfruit wine which was absolutely delicious as was Claire's masterpiece of steak, salad, oven fries, and garlic bread - my standard birthday request. AND I got a chocolate birthday cake too. WITH candles and singing. It was the best night! 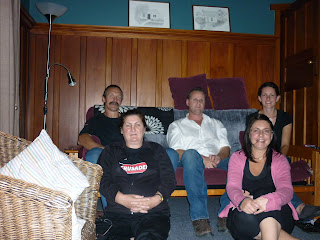 Netball has started a new season. We have played 3 games so far and won one out of those 3 which is not bad odds I guess. We've only had a full team about once but can usually poach subs from the courtside - depending who we get depends if we win or not! Not good when we rely on the subs to win us the game. It's still fun though and I have moved from Goal Shoot (apparently you have to be able to get the ball in the goal if you are Goal Shoot! Who would've thought?) to Wing Attack which I love - I get much more of a run around and feel like I have actually done something.
And welcome to the Roxy Review's 9th follower - Lynnie! Thanks for joining, it's a pleasure to have you along for the ride.
There has been a request from a long time reader to update the happenings of the cats - Toby and Min. They still board with Claire and are VERY well looked after. Quite often when I visit Roxy Inn Toby will run up to me to smooch around my legs. See, he CAN show his softer side sometimes! And he still loves getting under newspaper if ever it is on offer. He will sit under it for ages... waiting. It really doesn't matter what time of day or night I go over there, Min will always come out of Claire's room stretching and yawning with squinty little eyes like she has just woken up. She LOVES being brushed and will go so far as to brush her own face if the brush is left on the ground. Bless them. They fill my heart with such joy. And clever! Toby will sit outside the catdoor tapping it waiting for someone to go and open the door for him. If this doesn't work in the time frame he has allowed he will tap the door so it swings a little bit open and hook his little paw under the door, opening it up and letting himself in. One smart fellow he felt smart. 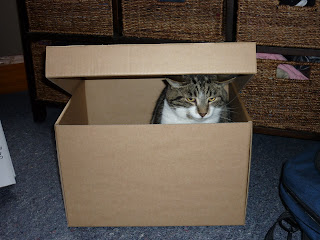 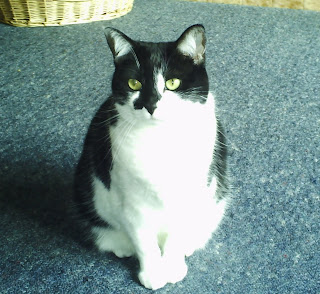 Dance Then Wherever You May Be

Easter is always a welcome break from work but this year it was made extra special by a visit from Mum and Dad. They arrived on Thursday and we all went out for dinner to Winnie Bagoes on Thursday night for Claire's graduation dinner. Claire and 2 others from her work had graduated from their year long correspondence course with a degree in early childhood teaching. It was a really good night and the food was very yummy. 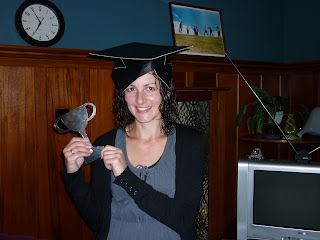 Good Friday usually means hot cross buns and this year Mum didn't disappoint! Paula and Alex came over for lunch too and Alex was suitably impressed with the buns. He mentioned he had never had home made hot cross buns before. Poor little Attis hasn't lived!! They were as great as ever.
Mum, Claire and I went to 3pm mass down at the Catholic Church in Fisher Ave. Good Friday mass is a somber occasion due to the subject of what Good Friday is all about - so there was no music, no singing out of time, and definately no laughing.
Dad was left home alone to potter around in the garden.
Dad, Claire and Mum worked hard over the weekend chopping, weeding, and clearing the back yard at Roxburgh Street. It looks heaps better, bigger, and sunnier now. Good work guys!
On Saturday morning we went to the casino for breakfast - all you can eat for $20! Aunty Bev and Paula met us there. There was loads to chose from and the coffee and tea kept coming. Brilliant. None of us needed lunch that day. 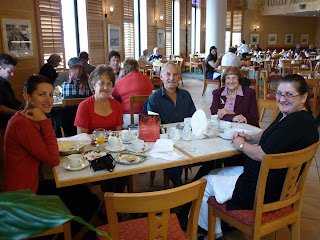 On Saturday night we went to Paula and Kazio's for a roast dinner. So basically we ate good food all weekend..... I feel full just thinking about it now!
I had a sleepover at Roxy Inn on Saturday night in preparation for the early airport delivery for Sunday morning. Mum and Dad flew off to Queenstown just after 8.30am to spend a few days with Gavin, Catkin, Annabelle, Bob and Sue. It sounds like they had a great time AND Annabelle had new moves to show off - she is now walking. Bless. 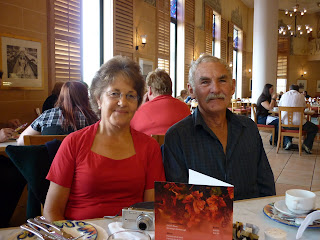 Other than all that the rest of the week has been pretty quiet. Our cousin Patrice was in Christchurch for the weekend and popped around to Roxburgh Street on Friday night for a Milo and a catch up. It was really nice to see her again and hear about what's going on with her and her family. She participated in a Masters Gymnastics Competition recently and won a gold medal. Well done Patrice! Although not long after that she tore her calf muscle while demonstrating a move and was on crutchers for a while. She's all better now though.

I've been keeping busy organising a 5 week overseas trip for the middle of the year. I have 2 weddings to attend - one in Portugal and one in Frankfurt - so am incorporating a visit to Japan, Edinburgh, Italy and Shanghai aswell. I am looking forward to it but have lots of planning and saving to do between now and then. I am hoping to meet up with Apes, Eds, and Renee while abroad for a cup of tea and a hug.
Posted by The Editor at 8:33 PM 3 comments: