We had visitors for Labour weekend - the Southern Barts came to stay for a couple of days before heading off to Melbourne for a week. Of course cameras were on charge a week in advance to allow for maximum paparazziing! 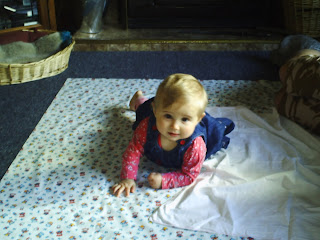 It was great to see them again as it had been 3 months since they were here last which was the last time we saw them. Annabelle was rolling around and sitting up on her own. She's a big girl now... with a great big set of lungs! It makes me laugh that Gavin (he who likes quietness) has a very vocal daughter! Ha! (Apologies for the clip - it sounds like Elmo is in the background.)

Again the cats were on high alert - the midget with tourettes was back! Annabelle clearly loves the cats and gets VERY excited upon seeing them. They are getting braver but do tend to stay out of sight when we have visitors of the tiny variety.

I dropped the Southen Barts off at the airport early, early on Sunday morning. Unfortunately Gavin had picked up a bug and wasn't very well. We had to stop en route to the airport so he could 'get some fresh air'. Two days later I caught the same bug and am currently on my second day off work. Not nice. Silver lining = I should do well at my weigh in this Friday. Fingers crossed.
Posted by The Editor at 2:29 PM 3 comments:

After a week of not much exercise but a WHOLE lot of stressing out, I weighed in this morning with a terrific 1.7kg weight loss result! I have reached my 5% original body weight loss too.
I do need to work out a plan this weekend as I am finding it hard to fit in exercise now that I have a part time job. As we all know - exercise is a key factor in losing weight.
I think the secret is the hill walk - the week I didn't do it I put on weight. So look out hill, here I come!!
Total weight loss to date = 4.9 kilos. Only 19.1 kgs to go. Easy.
Today is a good day.

I've been home alone for the past week - Claire and Mark are house/cat sitting for a friend of Mark out at Burwood. Claire isn't due back home until Sunday. I did get a text from Claire yesterday saying that the cat they are looking after is naughty and she misses and appreciates the good behaviour of Min and Toby.
It's all in the parenting.... 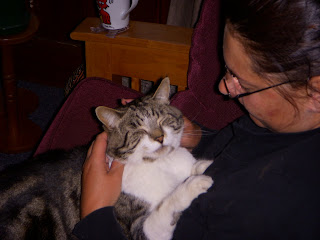 I had a visit from my friend Jo Glover from Auckland over the weekend. Jo has just returned from a 7 week tour of some parts of America and was en route to Winton to stay with her brother, his wife, and their two little kiddies.
She arrived on Saturday afternoon bringing the sunshine with her. We went to a movie on Saturday night - Couples Retreat which was quite good. Some laugh-out-loud parts. And then had a nice Chinese meal. $18 each got us about 5 different dishes to share PLUS chicken and corn soup PLUS spring rolls AND wontons! Needless to say we took a rather large doggy bag home with us! It was yummy!
On Sunday morning we conquered the hill walk - all the way up to The Sign Of The Takahe and back which is an hour and a half round trip. There was a lot of silence up the steeper parts of the hill! It was just too hard to talk.
I took Jo out to Riccarton Mall for a look around in the afternoon and then we met Mel at the Museum for a walk around Hagley Park in the evening. It was a good weekend.
Jo caught the bus to Invercargill on Monday morning so I dropped her in Worcester Street on my way to work.
Tuesday afternoon at work my exclusive man friend Lance popped in with perfume and wine that he had bought me while he was in Australia for 10 days for work. It was nice to see him but unfortunately he was on his way back home to Picton as he had an important meeting this morning at work. He plans to be back down in a few weeks so I will look forward to catching up properly then. Mmm... I smell nice today! 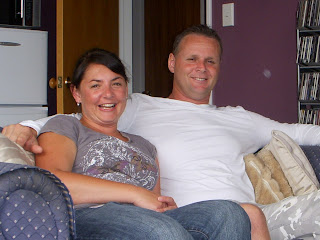 I have a sneaking suspicion that our horrid neighbours at number 12 have come into a bit of money recently. They have started upgrading bits around the house - starting with a new gate from the house to the garage. You'll never guess what the gate is made out of - Corrugated Iron! The very same material that she complained about us building a fence out of saying, and I quote 'It devalues the street'. Ha! Eat your words, Tinny! I hope it doesn't cause her too many migraines... much! The labourer had to replace wooden panels on the garage to attach the gate to which OBVIOUSLY means that the garage is rotten and about to fall down. Good to know.
Also it has been noted that they have new netting curtains - about time! AND she may even have slightly cleaned the windows of all the cat fur! There were no net curtains up at all for about a week which gave Claire and I maximum peeping Tom oppotunities! Not that we could see a whole lot - it's very dark in there.
I stand in the kitchen and don't even try to disguise the fact that I am staring at their hovel with a look of disgust on my face. Maybe they got the message.
We still get the constant noise from the breeding cats in cages down the back though which breaks my heart. I swear I can hear them saying 'Let me ouuuuuut!' or 'Danieeeeeeellllllleee!' Poor things. Cat breeders are NOT cat lovers, in my opinion.
Posted by The Editor at 2:12 PM No comments:

Not such a good result at my weigh-in this morning unfortunately. Apparently I put on 500grams this week. That's half a kilo. That's a lot. After walking every day this week for at least half an hour - most days twice - it was a bit of a shock. I guess it just means I will have to try harder next week. And I was so confident that I would have lost weight too - skiting away to Averil last night on Skype. That will teach me. Today I just feel like crawling under a rock.... with a packet of toffee pops.....

A Visit From The Queen

We've had quite an eventful time since the last blog was posted. Last Friday I had a waxing appointment after work and while I was upstairs getting hair ripped out some guy backed into my car. Luckily for me he is a nice guy and left his business card with details and licence plate number so I won't have to pay an excess to get my car fixed. The back drivers side light was completely smashed, with a dent in the metal below the light, and cracking on the bumper. I think the bumper has also been pushed forward a little. I have been in touch with my insurance company and got a quote from a collision repair place near my work. I've got the ok to go ahead but am just waiting for a courtesy car to come free and they will get it all fixed for me. 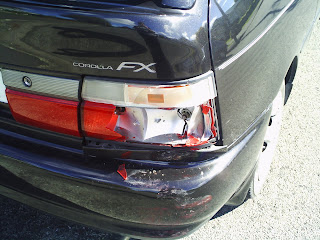 It was Nana Bartlett's 10 year anniversary on Saturday 26th so Claire and I went and met Paula at the graveyard and took some fresh flowers to put on the grave. The graveyard is kept really clean and tidy which is nice to see. 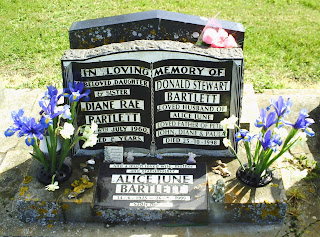 Mel's birthday was the 26th and we were invited to join her for drinks and dinner that night. Drinks were at 7.30pm at No.4 in Merivale then dinner was at Tutto Bene. There were about 10 of us altogether - all females - and it was a great night. We met a few of Mel's friends who we hadn't met before and they were lovely. We had a lot of laughs. Dinner was nice and afterwards we went to Sullivans for a drink. Claire and I headed home just after midnight... I think. 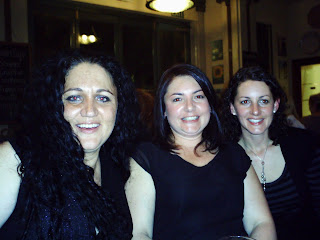 This week I started my new part time job at CherryTree. I worked Monday-Thursday 5.30-8.30pm. I really like it so far. The other girls are really lovely. So far I have been calling numbers from the phone book. Everyone so far has been very friendly. If they say they aren't interested then I politely end the call - they don't have to say no 10 times!
I'm hoping to keep playing netball on Thursdays so am going to talk to my manager tomorrow night and see if Thursdays can be flexible. Fingers crossed.

I had to rearrange my Weight Watchers meetings to accommodate the new job so have transferred to a meeting in town on Friday mornings at 7am. I got there in plenty of time on Friday and my weight loss this week was 1.5kgs! I was totally stoked!! Total weight loss to date is 3.7kgs. Only 20.3 kgs to go. Easy.

We had a VIP stay with us this weekend - Mum came on her way home from staying the week in Queenstown with the Southern Bart's. It was so nice to see her and get much needed Mum hugs. We got to play 2 games of REAL Scrabble (not that electronic Facebook one). Last night we went to the Pak's for dinner which was very yummy.
Yesterday we had a lovely ladies lunch out at Elevate - down by the Centaurus Road roundabout at the base of the Port Hills. It was just so great hanging out with Twisha (aka the cutest woman in the world!) 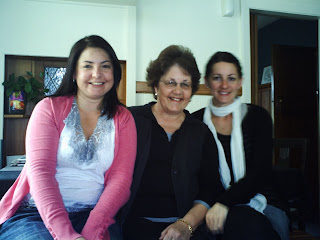 This morning we dropped Mum off at the airport and then this afternoon Claire, Mark, and I went to the movies to see 500 Days Of Summer. It was a nice movie. While there we saw advertising for the movie based on the childrens book 'Where The Wild Things Are'. I couldn't help but think that the character Max looks familiar..... 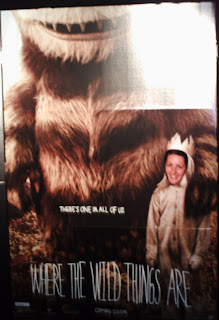